Places To See In Surakarta – If you’re looking for more of Central Java’s beautiful and diversified cultural legacy and scenery, Solo – also known as Surakarta, a little city near Jogja, is a must-see!

Hit the road from Yogyakarta for a quick 2-hour journey to Surakarta, its lesser-known neighbor!

Although Solo is known as the capital of batik, it has much more to offer. It is not only a haven for nature lovers but also for people who are always on the lookout for local delicacies!

Nothing beats stumbling across a stunning waterfall, especially in such a hot nation like Indonesia! Stepping into the chilly rushing waters brings nearly immediate relief, and they also look incredibly gorgeous!

Jurang Sundo is one of the many waterfalls in the Solo area, but it’s one of a kind. It has an artificial structure where the water flows down into a typical river on one side and into a fish pond on the other! You’ll have to decide whether or not you’re brave enough to swim with them!

The next Places To See In Surakarta is Jumog Waterfall Want to see breathtaking waterfalls cascading down a cliff and winding their way into peaceful rivers? At Jumog Waterfall, where the waters come from Mount Lawu, you can do precisely that!

Freshwater cascades down from a 30-meter-high waterfall surrounded by lush flora, and visitors may readily access the falls at any time of year to escape the crowds and enjoy the calm ambiance.

Tourists are also found meditating in this serene environment. It is recommended to visit early in the morning.

While you can get closer to the falls by jumping from rock to rock, you can also enjoy the view from the bridge or jump in for a morning dip.

Grojogan Selondo is a little waterfall formed out of rock formations to produce two small ponds at the bottom. It’s truly a sight to behold and one you’ll want to include in your travel plans!

Aside from being a great area to get away from the city heat, it’s also a great place to spend a relaxed day because it’s not too difficult to get here.

Bring a set of floaties if you want to spend some time in the freshwater ponds. We don’t encourage leaping off the cliffs because the water depth varies periodically, making it potentially risky.

Watch the sunset over a carpet of expansive rice fields while admiring twin rock sculptures atop a hill.

The surroundings have been left in their natural form, with no structures in the area, so you can enjoy an unimpeded view of Mount Merbabu, which is even more magnificent at sunset.

As the sun gently pierces through the clouds, breaking through the cold morning mist, the sunrise is equally beautiful.
Aside from the pleasant environment, this is also a vantage point from where you can see the adjacent communities.

It’s almost impossible to fathom the charming, calm roads of Solo just 2 hours away from the city, given the rush and bustle of Jogja. 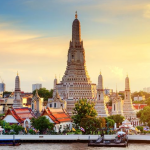 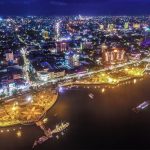